Sophie reported that for the week ending September 6, seasonal influenza remains below baseline for all of our threshold values for the 2013–2014 season. For the most recent week, 1.31% of specimens submitted for testing were positive, a reduction from the previous week. The ILI-Net national data indicated 0.9% of total patient visits were for ILI. This is higher than the previous week, but still well below the national baseline of 2%.

No new cases of novel influenza A H3N2 variant have been reported since the last Summit call. To date, 2 reports have been received from Ohio.

CDC will continue to publish an abbreviated version of the weekly surveillance report until the new season starts in October.

Tamara provided a presentation on the ACIP’s new pneumococcal vaccine recommendations for adults, which were just released in the September 19 MMWR. By way of background, Tamara reviewed the 2010 recommendations for the use of 23-valent pneumococcal polysaccharide vaccine (PPSV23). At that time, one dose of PPSV23 was recommended  for adults >65 years and adults 19–64 years who had certain chronic medical conditions, while 2 doses were recommended for adults 19–64 years who had functional or anatomic asplenia or were immunocompromised.

In late 2011, the FDA approved the use of 13-valent pneumococcal conjugate vaccine (PCV13) in adults >50 years. This approval was based on the vaccine’s non-inferior immunogenicity compared to PPSV23. The vaccine was indicated for prevention of pneumococcal disease (including pneumonia and invasive disease) in adults >50 years and to prevent disease caused by the serotypes included in PCV13. A randomized controlled trial of PCV13 against pneumococcal pneumonia was required as a post-approval condition of licensure. In the 2012 recommendations, the ACIP chose to defer a recommendation for routine use of PCV13 in adults >65 years until the results of the controlled trial were available, as well as to allow more time to review the indirect (herd) effects resulting from use of PCV13 in children. However, the ACIP did move forward with a recommendation for a dose of PCV13 in sequence with PPSV23 for adults with immunocompromising conditions.

When the results of the Community Acquired Pneumococcal Immunization Trial in Adults (CAPiTA) were presented at the June 2014 ACIP meeting, the evidence indicated that PCV13 resulted in a 75% reduction in vaccine type invasive pneumococcal disease (IPD) and a 45% reduction in vaccine type non-bacteremic pneumonia. In addition, the immune response was non-inferior or improved over PPSV23. Finally, the clinical trial demonstrated safety of PCV13 in this population.

On a separate issue, data indicated that the burden of pneumococcal disease remained in spite of the herd immunity effects of vaccinating young children with PCV13. In 2013, there were ~2,600 PCV13 type IPD cases and >50,000 PCV13 type cases of inpatient community acquired pneumonia (CAP.) PCV13 serotypes account for ~20-25% of IPD and ~10% of CAP.

After reviewing these results and holding a special August meeting on this subject, the ACIP voted to recommend the use of PCV13 in series with PPSV23 for all adults >65. However, these recommendations are complicated by the need to determine whether the patient has a prior history of receipt of either PPSV23 or PCV13. Tamara reviewed the recommendations for the different categories of adults, based on their vaccine history, and also provided information on the required time intervals between doses. Specific details on the recommendations were provided in Tamara’s presentation that was distributed before the call and are summarized in the following schematic. (Note: CDC plans to develop this chart into communications materials for providers.) 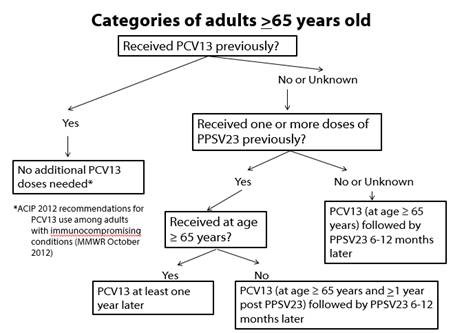 Because the ACIP anticipates the utility of this recommendation will be time-limited, it will be re-evaluated in 2018 and revised as needed. At that time, the ACIP will be able to monitor the impact of the new recommendation, as well as disease trends among PCV13-naïve adults resulting from herd effects. In the interim, the ACIP will receive routine updates on changes in the vaccine-preventable disease burden from both direct and indirect effects of PCV13 use.

One additional issue related to implementation of this new recommendation is that Medicare Part B generally covers only one pneumococcal vaccination for beneficiaries. (Exceptions to this one dose policy are allowed in certain instances based on the beneficiary’s risk or the uncertainty of his/her vaccination status.) CMS plans to review the newly recommended two dose regimen to determine if a change in Medicare coverage is supported and the best mechanism to change the current policy. However, it is anticipated it will be at least a year before any change in policy would take effect.

Tamara also reviewed the ACIP’s recommendations for PCV13 and PPSV23 use among adults >19 years with immunocompromising conditions. These remain unchanged from the recommendations adopted in 2012. In general, vaccine-naïve adults with immunocompromising conditions (see the MMWR for a table of underlying medical conditions associated with specific vaccine recommendations) should receive PCV13 before PPSV23, whenever possible, and PPSV23 should be given at least 8 weeks after PCV13. For these adults who have a history of PPSV23 vaccine, a dose of PCV13 is recommended 1 or more years after the last dose of PPSV23.

In summary, Tamara noted that:

One Summit member asked whether the estimated occurrence of pneumococcal disease from PCV13 serotypes was based on persons who had previously received PPSV23 or were unvaccinated. Tamara replied that we do not have population-based surveillance; individual surveillance data is used for IPD and ICD-9 codes are used for CAP. Surveys indicate ~60% PPSV23 coverage in this population, but we do not have data on vaccinated versus unvaccinated individuals.

Another Summit member pointed out that the recommendation likely will result in a number of people wanting to receive PCV13 who are unable to afford the vaccine, and they will need assurances that they are protected by PPSV23. Tamara stated that there is sufficient data to show that PPSV23 provides protection, though there is less consensus on its effectiveness against non-invasive pneumococcal disease. This is the gap filled by PCV13. She agreed that CDC should address this issue in the talking points which are being developed for providers.

Tamara responded to several questions related to vaccine payment. Medicare will cover one dose of PCV13 for anyone who is now >65, regardless of any doses of pneumococcal vaccine they received prior to age 65 (i.e., prior to when they were eligible for Medicare.) For private insurance coverage, providers should check with individual insurance plans. Insurance companies have up to one year to include coverage based on new ACIP recommendations. However, Carolyn Bridges added that the recommendation for use of PCV13 in immunocompromised adults has been out more than a year, so these individuals likely are covered.

In response to a question, Carolyn noted that CDC has an extensive website on non-polio enterovirus, including answers to commonly asked questions about EV-D68 infections and an update on states reporting lab-confirmed cases.

The CDC weekly influenza surveillance report for week 37 (ending September 13, 2014) and region specific data are now available. Of all deaths reported through the 122 Cities Mortality Responding System, 5.5 % were due to P&I. This percentage was below the epidemic threshold of 6.0% for week 37.

Nationwide during week 37, 1.1% of patient visits reported through the U.S. Outpatient Influenza-like Illness Surveillance Network (ILINet) were due to influenza-like illness (ILI). This percentage is below the national baseline of 2.0%. ILI is defined as fever (temperature of 100°F [37.8°C] or greater, and cough and/or sore throat. An Influenza Summary Update of the influenza activity reported by state and territorial epidemiologists, which indicates geographic spread of influenza viruses but does not measure the intensity of influenza activity, is available. This currently reflects data from May 17, 2014 and will be updated with the official start of the influenza season.

Archives of previous FluViews are available from CDC. CDC’s seasonal influenza key points have not started at this time.

As a follow up to the September 18 NFID influenza/pneumococcal press conference, CDC shared flu vaccination coverage key points with its partners as a means of providing awareness of flu activity and other pertinent flu-related information, as well as a helpful tool to maintain consistency in communicating flu-related messages. (Note: The key points are not intended for distribution to the public or posting to public web sites. Please link to CDC’s flu website at www.cdc.gov/flu for content to share with the public.) CDC has posted a link to the press conference from its flu partner webpage.

– Vaccine coverage information for the 2013–2014 flu season is accessible through CDC’s flu website.

Revised key points on enterovirus D68 (EV-D68) in the United States are available from CDC. Please also note that CDC has also revised its EV-D68 webpage. It includes answers to common questions about risk, transmission, treatment, and what CDC is doing; a map of states with CDC lab-confirmed EV-D68 cases (CDC will update this daily while interest remains high); and an infographic depicting good hygiene steps to follow to help protect children from illness.

Two summaries of the May 2014 NAIIS face-to-face meeting have been released. One features a fairly detailed summary of the entire meeting while the second is a shorter executive summary. To download either or both versions of the summaries, please visit the Summit home page at: www.izsummitpartners.org.

In a recent MMWR (dated September 19) CDC released new pneumococcal vaccination recommendations. Adults 65 years of age or older are now recommended to get the pneumococcal conjugate vaccine (PCV13, Prevnar-13®), followed by the pneumococcal polysaccharide vaccine (PPSV23, Pneumovax®23) 6-12 months later. As adults start to visit their healthcare professionals for their annual flu shot, it’s also an opportunity to raise awareness for the importance of pneumococcal vaccination and to educate healthcare professionals and the general public on the new recommendation.

Attached are key points regarding pneumococcal vaccination recommendations to assist you in your communication activities with healthcare professionals and adults 65 years or older.*

You can help increase awareness among healthcare professionals by:

Ideas for increasing awareness among adults 65 years or older include:

Every Child By Two (ECBT) Compiles Media Information on Its Website

On a daily basis, ECBT assembles significant news media coverage on immunizations in their “Daily Clips.” Summit partners may find this effort useful.

Remember to visit the Summit website for the latest on influenza immunization resources. You can also find archived copies of The Summit Buzz there.

Summit calls are scheduled every Thursday at 3 pm ET, unless cancelled. Please email L.J Tan or LaDora Woods if you have any updates on activities to provide to the Summit.